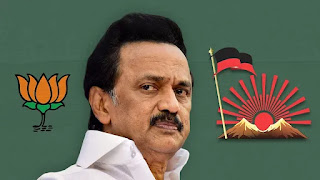 December 5, 1992, Karunanidhi wrote in Murasoli
‘What does karseva mean? Service to god or service to sow seeds of unrest? [And a lady here to lend a hand to this deed?]
They say Ram was born in the Treta Yuga
Dvapara yuga arrived and has been crossed
When one says this is Kali Yuga
It means twenty lakh years have gone by
‘They say Ram was born there twenty lakh years ago. Who saw that, I wonder? Who has written about it? Now by insisting that this is the exact place, how just is it to demolish Islamic history? ‘
‘If you say you want a temple for Ram in Ayodhya, we have no quarrel about that. But if you say to build the temple you will demolish Babri Masjid, we will not agree!’
One would wonder whether DMK would ever have an alliance with BJP after such a thought provoking article .
And yes, few years later they went on to be a part of BJP alliance and even took few minister berths for the “cadres” !
And guess what , the Ram Mandir will be built by 2023 and who knows , DMK might have an alliance with BJP 🤷🏼‍♂️.
And that my friends is called  – politics !